Last week was remarkable. Wednesday Harrison had his monthly visit to the hospital for Vincristine, a terrible toxin that is helping him beat leukemia. He hates Vincristine because of the severe pain he gets in his knees and ankles. It’s punishing.

He also started a five-day pulse of steroids. I hate the steroids even more than he does. His mood changes and his appetite becomes insatiable. It’s the drug that gives leukemia patients their “moon face.”

The next morning he went to the dentist. Yep, two cavities. The chemo weakens bones, teeth, and enamel. Just part of what makes having cancer horrible for these kids.

To have his cavities filled he had to take an antibiotic to prevent infection due to his immunosuppresion. More medicine. More danger. Par for the course.

Thursday night he played in a baseball game. How? I’ll never know. His determination is simply beyond my understanding. I would have wanted to rest on the couch all night. It took two extra innings to win, as well. It was a long night for Harrison.

Friday morning he had two cavities filled and one tooth pulled. It was his first time ever to have dental work other than cleanings done. He was sick from the medicine and spent the day on the couch resting for, you guessed it, the semi-final game of his baseball tournament.

The chemo had really kicked in. He was fatigued and nauseas. Torrential rains came that caused the game to be suspended in the second inning. I was grateful that he would get some rest.

Saturday morning we left the house at 8:00 for a 9:15 game and didn’t get home until almost 6:00.  I don’t know how he does it. He just had to get there early for some batting practice. The game continued and his team had a sizable lead.

But his opponents mounted a serious comeback. In the final inning Harrison’s team was up by one run. The bases were loaded. One out. Tying run on third.

And Harrison came in to pitch. I’ll admit I wasn’t too sure about the decision. He has terribly fatigued from the chemo and dental work. He hadn’t rested well the night before. And here was on the mound with the entire season on the line.

He struck out the first batter.

One out from a win. One walk from extra innings (again). One single from a loss.

As could happen only to Harrison, the count went to three balls and one strike. He stepped off the back of the mound and took a deep breath. Fast ball at the knees for strike two. Full count. Bases loaded. One pitch would decide the game.

With ice-water running through his veins he went into his wind-up. Leg kick. Stride. Fast ball at the knees. STRIKE THREE. Fans, players, and coaches went crazy.

But Harrison just pumped his fist and shook hands with his opponents. He knew there was still a job to do. The season isn’t over until you lose or you win the championship game. No one gets a trophy for second place.

He and his teammates had another two and a half hours until the championship game. He watched the other semi-final game and later gave me his scouting report. Honestly, he could coach his own team.

The championship game was nip and tuck. The lead changed nearly every inning. You could not write the story any better than it evolved. The bottom of the final inning. Harrison’s team leading by one run. Two runners on base. Two outs. The other team’s biggest hitter at the plate. He already had most of his team’s RBIs.  Harrison on the mound.

His mother was nearly in tears.  But not Harrison.  He thrives in situations like this.  Any coach who passes on this kid will be just plain stupid.

Harrison started him off with a fast ball that was slightly down for a ball. The next pitch was down the middle for strike one. Another strike on the inside corner at the knees. One-two Harrison threw some chin music up and in, backing the hitter off the plate. Without any instruction from the coach he then went low and away. What a mind for the game. [I know too many high school pitchers that wouldn’t know to do that]. But the hitter didn’t bite, pushing the count to 2-2.

Knowing the batter was advanced, Harrison wanted to keep it low, but he was just a little too low.

Harrison looked over the top of his glove to find the catcher’s mitt. No turning back…

The pitch was a fast ball slightly off the plate and down, but the hitter couldn’t resist. Game over.

This time Harrison threw his glove in the air, raced to chest bump his catcher, then fled his teammates into the outfield where they chased him for a dogpile.

I think it was the first time I saw Harrison smile all day. 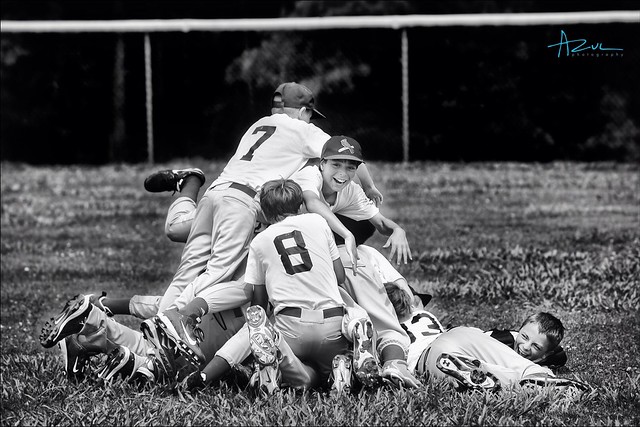 Look into his face during a game and all you will see it determination. No time to rest. No time to feel sorry for yourself. No time to worry about chemo or needles or pills or leukemia cells. There is no cancer on the baseball field. Just boys playing the world’s greatest game.

And Harrison is just one of those boys. He isn’t a cancer kid. He isn’t the sick kid. He’s just the kid.  The kid who helped his teammates to a championship.

And on that day he became a champion on the baseball field.

Of course, every day he’s a champion to me.

28 Comments on “From Chemo to Championship”